The official blurb:  From the director of Aladdin  and co-director of The Book of Mormon – and the producer of Avenue Q and In the Heights – comes something original… something fresh… Something Rotten!, a world-premiere musical comedy about the musical comedy that started it all. Welcome to the ‘90s — the 1590s — long before the dawn of premium tickets, star casting and reminders to turn off your cell phones. Brothers Nick and Nigel Bottom are desperate to write a hit play but are stuck in the shadow of that Renaissance rockstar known as “The Bard.” When a local soothsayer foretells that the future of theatre involves singing, dancing and acting at the same time, Nick and Nigel set out to write the world’s very first MUSICAL! But amidst the scandalous excitement of Opening Night, the Bottom Brothers realize that reaching the top means being true to thine own self… and all that jazz. With its heart on its ruffled sleeve and sequins in its soul, Something Rotten!  is an uproarious dose of pure Broadway fun and an irresistible ode to musicals — those dazzling creations that entertain us, inspire us and remind us that everything’s better with an exclamation point!

My take: What an amazing discovery of a show. Loved, loved, loved it. It keeps getting funnier and smarter by the minute.
This truly remarkable story about the first musical is a funny love letter to musicals and theater in general. If you are as obsessed with the stage as I am you are going to love all the innuendoes, jokes and melodic references. If you don’t, it’s still funny in its own right. The song It’s a musical was just an amazing show stopper, there is no denying it brings the house down! (although I could have done with less tap more song ) Christian Borle was surprisingly the only part of the show I wasn’t crazy about. I loved the concept of his character, Shakespeare as a rock star, but I was annoyed with him for half the show – which either means he does a hell of a part or he’s just irritating in general  – its still a minor quibble in what is one hell of a show that is a must see! 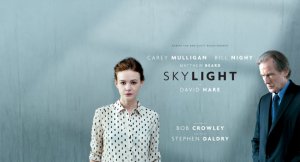 The official blurb: On a bitterly cold London evening, schoolteacher Kyra Hollis (Carey Mulligan) receives an unexpected visit from her former lover, Tom Sergeant (Bill Nighy), a successful and charismatic restaurateur whose wife has recently died. As the evening progresses, the two attempt to rekindle their once passionate relationship, only to find themselves locked in a dangerous battle of opposing ideologies and mutual desires. Skylight is designed by Bob Crowley, with lighting design by Natasha Katz, sound design by Paul Arditti, and original music by Paul Englishby. Skylight is produced on Broadway by Robert Fox and Scott Rudin.

My take: I left the theater exhilarated after seeing this show, and with my mind  still processing the previous two hours. However, did I like the show or the performances? I’m not 100% sure yet, but i think its definitely a good play with amazing performances. If it weren’t from them, the show might drag a bit. However the acting leaves nothing to be desired. Bill Nighy  is spectacular. Carey Mulligan although below my expectations gives a very solid performance, and makes up in act 2 what I found a bit lacking in Act 1. I was thinking that in theory these two together should not work, yet there is amazing chemistry and one can sense the awkwardness, history and tension between them, from afar.

I’m always a fan of Bob Crowley’s work, and here his sets do not disappoint. Total Simplicity but it filled the stage, and gave a great setting to the “disgrace” of Kyra’s living conditions.

Note of warning – do not come to the theater with an empty stomach. Kyra cooks up a mean bolognese live on stage, and just the smell will make you REALLY hungry throughout if you decided to skip lunch (like i did!) 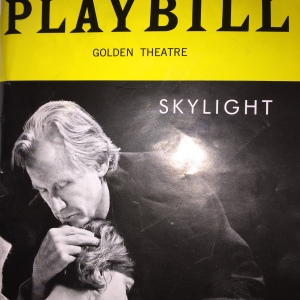 I also caught the Carlyle Bar performance of Lena Hall! spectacular show – if you can run to see it!!!! It was a great juxtaposition the classical beauty fo the carlyle with the gritty rock and bluesy music that she sings.