I shared my Theater Season Wishlist with you recently, and this weekend I was fortunate enough to check 3 off the list. First up – Big Fish. 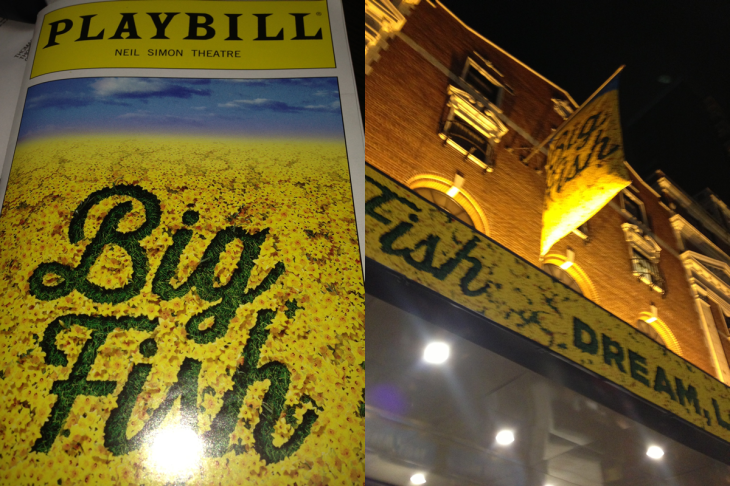 There are few musicals that touched as many heartstrings as Big Fish. I probably cried more at Les Mis and Rent, but that might be about it. It is a beautifully emotional, loud  musical that i think will be generally enjoyed by everyone. It might not be a theatrical or tecnical masterpiece, but it is one of those one size fits all type of musicals, that reminisce of the old Rogers and Hammerstein i used to see when i was little.  Based on the book and the Ewan McGregor movie, Big Fish takes advantage of the fantastical tales of Edward Bloom to transform them in showstopping musical numbers. Given that Susan Stroman is directing, it is also no surprise that there are some beautiful dance numbers. My favorites were “The Witch” number, where dancers emerge from tree trunks – it was just visually spectacular and “Red, White and True” where absurdity meets dancing in a fabulous way. Also keep an eye out for the dancing elephants, they are just too cute.  As for emotional content the song “Fight the Dragons” is just spectacular, a great duet between Father and Son, where I think is were the house started to collectively need tissues. I think there were few dry eyes in the theater by the end of the show.

I was nervous going into the performance because Norbert Leo Butz had been out of the show the previous two days because of a cold, and he was 90% of the reason I wanted to see this. Happily, he was back on for the show we went. Although his voice wasn’t in top form ( I have seen what he can do and he definitely wasn’t at his 100%), he was absolutely spectacular. I know the season is just starting but he makes such a strong case to add one more Tony to his trophy case. The role is killer, it just requires so much of him and he delivers to perfection. He is in most scenes, sings dances, and plays a character from high school age to eldery. To say that he is stellar is an understatement, the acting is just absurd!!!  His performance of course is the standout. Everybody else in the cast is really good, but no one pops out as much as him (which is probably the way it was intended).

I am a big fan on Andrew Lippa and the music here did not disappoint. It is not his best work, but as always his melodies are catchy, and i was singing to myself “Be the hero” all the way from the theater to the restaurant. Its still in my head a little bit. Sets are grand, colorful and fabulous, and its exactly what you expect in a big musical. Definitely a must see, don’t miss it. After seeing this show and reading the reviews which were lukewarm at best, I have to say I had a completely different experience.

On a related matter here’s a great interview with Big Fish Star Norbert Leo Butz on How Tragedy Changed His Life and Career, also and article from Buzzfeed 9 Times The “Big Fish” Musical Outshined The Movie

And here are the official reviews for the show: NYTimes, NYpost, Broadway World, Variety, The Hollywood Reporter, Bloomberg

Offical description: BIG FISH is a new Broadway musical featuring direction and choreography by 5-time Tony Award® winner Susan Stroman (The Producers, The Scottsboro Boys), music and lyrics by Tony nominee Andrew Lippa (The Addams Family, The Wild Party), and a new book by esteemed screenwriter John August (Big Fish, Charlie and the Chocolate Factory). Two-time Tony winner Norbert Leo Butz (Dirty Rotten Scoundrels, Catch Me If You Can), Tony nominee Kate Baldwin (Giant, Finian’s Rainbow) and Tony nominee Bobby Steggert (Giant, Ragtime) lead the cast of amazing characters. Based on the celebrated novel by Daniel Wallace and the acclaimed Columbia Pictures film directed by Tim Burton, BIG FISH centers on Edward Bloom, a traveling salesman who lives life to its fullest… and then some! Edward’s incredible, larger-than-life stories thrill everyone around him – most of all, his devoted wife Sandra. But their son Will, about to have a child of his own, is determined to find the truth behind his father’s epic tales. Overflowing with heart, humor and spectacular stagecraft, BIG FISH is an extraordinary new Broadway musical that reminds us why we love going to the theatre – for an experience that’s richer, funnier and BIGGER than life itself.