Mrs. Everything by Jennifer Weiner

Goodreads Blurb: From Jennifer Weiner, the #1 New York Times bestselling author of Who Do You Love and In Her Shoes, comes a smart, thoughtful, and timely exploration of two sisters’ lives from the 1950s to the present as they struggle to find their places—and be true to themselves—in a rapidly evolving world. Mrs. Everything is an ambitious, richly textured journey through history—and herstory—as these two sisters navigate a changing America over the course of their lives.
Do we change or does the world change us?
Jo and Bethie Kaufman were born into a world full of promise.
Growing up in 1950s Detroit, they live in a perfect “Dick and Jane” house, where their roles in the family are clearly defined. Jo is the tomboy, the bookish rebel with a passion to make the world more fair; Bethie is the pretty, feminine good girl, a would-be star who enjoys the power her beauty confers and dreams of a traditional life.
But the truth ends up looking different from what the girls imagined. Jo and Bethie survive traumas and tragedies. As their lives unfold against the background of free love and Vietnam, Woodstock and women’s lib, Bethie becomes an adventure-loving wild child who dives headlong into the counterculture and is up for anything (except settling down). Meanwhile, Jo becomes a proper young mother in Connecticut, a witness to the changing world instead of a participant. Neither woman inhabits the world she dreams of, nor has a life that feels authentic or brings her joy. Is it too late for the women to finally stake a claim on happily ever after?
In her most ambitious novel yet, Jennifer Weiner tells a story of two sisters who, with their different dreams and different paths, offer answers to the question: How should a woman be in the world?

My Take:  3.5 out of 5 This was not an easy book to read. It flew by and i did  stay up one night just finishing it as I really wanted to know what happened, but it takes it’s toll. It’s 70 years of story and two perspectives, many characters and a lot of drama. Is it a good book yes. Fur sure its her most ambitious, but is it my favorite Jennifer Weiner book? no. I liked the emotional connection of her first books more, which had a lightness of reading but such a depth of heart. This has a depth of story, such feminism and female story throughout that makes for amazing social commentary but less of an enjoyable story. It’s an epic tale of how women’s lives have changed, and it really made me happy I was born in 1982 and not in the 50s.

Goodreads Blurb: 1946, Manhattan. Grace Healey is rebuilding her life after losing her husband during the war. One morning while passing through Grand Central Terminal on her way to work, she finds an abandoned suitcase tucked beneath a bench. Unable to resist her own curiosity, Grace opens the suitcase, where she discovers a dozen photographs—each of a different woman. In a moment of impulse, Grace takes the photographs and quickly leaves the station. Grace soon learns that the suitcase belonged to a woman named Eleanor Trigg, leader of a ring of female secret agents who were deployed out of London during the war. Twelve of these women were sent to Occupied Europe as couriers and radio operators to aid the resistance, but they never returned home, their fates a mystery. Setting out to learn the truth behind the women in the photographs, Grace finds herself drawn to a young mother turned agent named Marie, whose daring mission overseas reveals a remarkable story of friendship, valor and betrayal. Vividly rendered and inspired by true events, New York Times bestselling author Pam Jenoff shines a light on the incredible heroics of the brave women of the war, and weaves a mesmerizing tale of courage, sisterhood and the great strength of women to survive in the hardest of circumstances

My Take: 4 out of 5. I think it is a very solid and interesting Historical Fiction Book.  I love War historical fiction books (I have reviewed many here in the blog) and this one is a solid effort. The fact that it has 3 narrators makes it really interesting in the sense that you have multiple view points, yet it also makes some of the mistery be lost as some of the hypothesis you know to be true as you have seen the other side. I think the ending is extremely solid and it shows light to a very interesting side of the war effort and some commentary as to what it takes to actually win.

The Cactus by Sarah Haywood 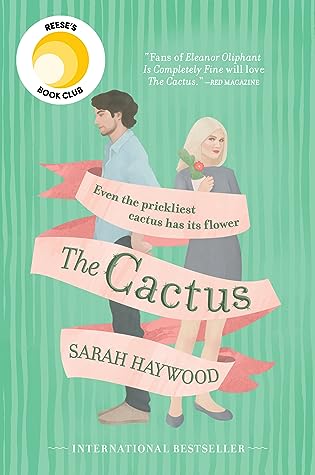 Goodreads Blurb:  For Susan Green, messy emotions don’t fit into the equation of her perfectly ordered life. She has a flat that is ideal for one, a job that suits her passion for logic, and an “interpersonal arrangement” that provides cultural and other, more intimate, benefits. But suddenly confronted with the loss of her mother and the news that she is about to become a mother herself, Susan’s greatest fear is realized. She is losing control.
Enter Rob, the dubious but well-meaning friend of her indolent brother. As Susan’s due date draws near and her dismantled world falls further into a tailspin, Susan finds an unlikely ally in Rob. She might have a chance at finding real love and learning to love herself, if only she can figure out how to let go

My take:  3 out of 5. I was looking forward to this book as it as a Reese Book Club suggestion and they usually are very good. This one didn’t fully live up to the expectations for me. What was good: It was a quick read and it had some strong character development and arcs and it provides some strong commentary on women’s choices and decisions. What didn’t work for me. The big twist I figured out 50% on the way through the book, so when it was discovered at 85% the level of surprise just wasn’t there. Also the main character is really annoying. Annoyance can make a book interesting as it provides great psychological insight. But eventually you just get annoyed at all the stupid decisions. Also so much family drama that it was a bit overwhelming. I did manage to read it in just one day so that was a strong positive and its a solid option if you have nothing else to read, but with so many good books coming out i think there are better options.