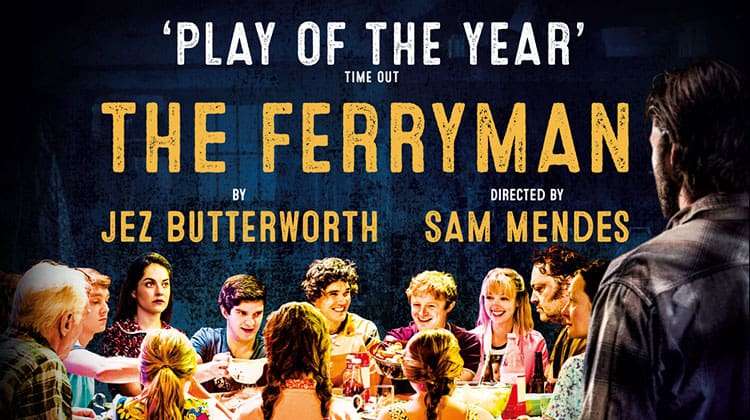 Northern Ireland, 1981. The Carney farmhouse is a hive of activity with preparations for the annual harvest.  A day of hard work on the land and a traditional night of feasting and celebrations lie ahead. But this year they will be interrupted by a visitor.

“This family can take care of its own.”

Jez Butterworth returns after The River and the multi-award winning Jerusalem with his new play The Ferryman. Directed by  Sam Mendes .

My Take: That was intense. and wonderful. and dark. and cool. It’s heartbreaking, yet it fills your heart with appreciation of the beauty you just saw onstage. Im also a bit confused and want to go and read quite a bit about Irish history given that I clearly know nothing. One of the best things I can say about this show is that I was dreading going because its a three hour + show and i had woken up at 3am to take a flight – yet between the compellingness of the story and the Irish accent it kept me on my seat. The cast in a wonderful ensemble, expanding all ages, and everyone is great including the multiple little kids. It is a truly family piece, and boy do family dynamics come into play. It also has the right amount of suspense and twists for it not to just be a family drama about family drama but keep it interesting. It’s not an easy watch, but one that should be done as it is theater at its best. What true drama on stage should be, and what plays should attain to do. Sam Mendes direction is pretty on point!  My favorite part of the piece was how loss and grief is handled in all its possible ways, a true case study within one family.

Blurb:From humble beginnings in Nutbush, Tennessee, to her transformation into the global Queen of Rock ‘n’ Roll, Tina Turner didn’t just break the rules, she rewrote them. This new stage musical reveals the untold story of a woman who dared to defy the bounds of her age, gender and race.

One of the world’s best-selling artists of all time, Tina Turner has won 12 Grammy Awards and her live shows have been seen by millions, with more concert tickets sold than any other solo performer in music history.

My Take: I Was very excited to see this musical during its previews whilst I was in London! The main conclusion: Adrienne Warren is a star! She is absolutely spectacular as Tina – she lights up the stage. I had seen her in Bring it On and Shuffle Along and had really liked her but this is another level of star quality. She adopts perfect Tina mannerisms and voice/ it’s impressive. She also carries the whole show, even more than I expected her too. It’s such a demanding role! The rest of the show: I wasn’t as impressed. another show who is just not living up to its potential and could use some work. And it has so much potential with the music and that performance. What were some of the issues we saw with it:

In general it is a super fun and exciting night at the theater and there is so much energy on stage (and sometimes too much in the seats as well some people were seriously fan girling), absolutely wonderful music and singing and some truly powerful moments. My favorite: the act 1 closing – it was the most impactful and emotional moment of the show and That’s how I wanted it all 🙂

My fourth visit to Hamilton, this one to check out the original West End Cast in London. It was really interesting seeing it with a completely new cast , who is totally fabulous. Also it just never looses its charm. It’s still absolutely engaging energetic and wonderful even if I had already seen it before and know every word by heart. It is a different experience in certain times. For example the response to the king is still loud but in a different way. And The Schuyler sisters song definitely does not get the same response you get in NY. I guess the line that NY is the greatest city might not fly as well. However i was impressed that some lines that played really well in NY, like Immigrant we get the job done, were as hugely received in London as in NY. So since i have shared my thoughts on the show plenty of times, I thought it should write what I loved and didnt love as much in this new West End version.

Who did I love: The Schuyler Sisters are amazing in this West End incarnation. Rachelle Anne Go as Eliza has beautiful presence. Rachel John’s voice is insane, big and wonderful.  I was a bit confused with Jamael Westman’s Hamilton at first but grew to really love his performance. He is also so tall he cast a commanding presence in the stage which is really interesting.

Who didn’t I love: I wasn’t sold on Aaron Burr. I read that he decided to put the lisp on to better develop the character but it just seemed weird to me. It just made me miss Leslie Odom Jr.. Aaron’s songs are in my book the best on the show and I think he just didn’t give it enough depth. He’s not bad he’s just not as fabulous and I think some songs lost for it.

All the other characters were excellent and it was a fabulous night at the theater again!!