Official Blurb: Get close — but not too close — to LITTLE SHOP OF HORRORS when it returns to its off-Broadway roots this fall! Experience the iconic musical as it was meant to be seen, in an intimate 270-seat setting. This thrilling new production stars Emmy® Award winner Tammy Blanchard (“Life with Judy Garland: Me and My Shadows”), Tony Award® nominee Jonathan Groff (Hamilton), and two-time Tony winner Christian Borle (Something Rotten!). Together they bring succulent new life to a show that has made three decades of theatergoers laugh, scream, and give up gardening for good.

My Take: I was really excited to see this. I had actually never seen Little Shop of Horrors live professionally and this cast just had me rushing for a ticket. I was not dissapointed. Jonathan Groff was excellent, everything I expected him to be and more as Seymour. Christian Borle was a hoot in all its characters and a pleasure to watch. The only performance that didn’t reach my expectations level might have been Tammy Blanchard, i just didn’t fully love her as Audrey and her Something Green was not as good as expected. It is not a creative re-imagining of the show, it exactly what you expect it to be, with exceptional acting and the wonderful music that you know and love. A must watch. Og and the plant is really well done! I was impressed by the maneuvering of it.

Two Alan Menken side notes. First, how is it that this is the first time that I realize that Something Green has the same melody than Part of Your world? Mind blown, clearly i hadn’t watch this show in a while and its songs are not as fully played in my musicals playlist as the little mermaid ones?  Second, Seeing this show was just another day, and another reminder of how amazing Alan Menken is. that is it, that is the note.

Funny fact, my last minute ticket attempt put me square in first show which was amazing for everything other than the fact that JG is a mayor spitter whilst singing, we were a bit showered. 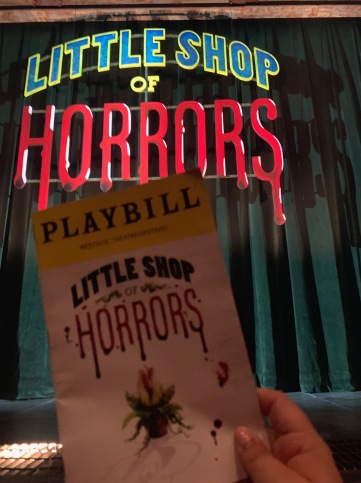 Official Blurb: It begins with a gathering of young, gay New Yorkers.
Each has a story aching to come out…

Profoundly touching and wickedly hilarious, Matthew Lopez’ highly anticipated two-part play, THE INHERITANCE, asks how much we owe to those who lived and loved before us, and questions the role we must play for future generations. Brilliantly re-envisioning E. M. Forster’s masterpiece Howards End to 21st-century New York, it follows the interlinking lives of three generations of gay men. In their search for belonging, they discover that when we connect, we thrive.This epic new play by Matthew Lopez marks the Broadway debut of one of America’s boldest theatrical voices and is directed by visionary two-time Tony Award® winner Stephen Daldry (Billy Elliot, Netflix’s “The Crown”). THE INHERITANCE is a life-affirming journey of tears and laughter, through conflicts and connections, heartbreak and hope. A new play, generations in the making.

My Take:  this is a beast of a show. I’m on my first 3 and a half hours ,and have part 2 to go, so most of my thoughts will come then, but i think I’ve seen enough to give a first take. Its not an easy watch but its a wonderfully relevant and powerful show that should be watched. The performances are spectacular. I especially enjoyed Kyle Soller as Eric Glass and Paul Hilton as Morgan and Walter.  It took a while for me to get fully on board, by the end of the third act I was hooked and I’m looking forward to Part 2. My only concern after seeing part 1 is, did it need to be this long? could it have been made shorter? or if it needed to be this epic, might it not have been the novel of a generation, with potentially even broader appeal? I am off to watch Howards end, before seeing part 2 so that i fully get the analogy as I’ve seen it so long ago i didn’t get all the references. 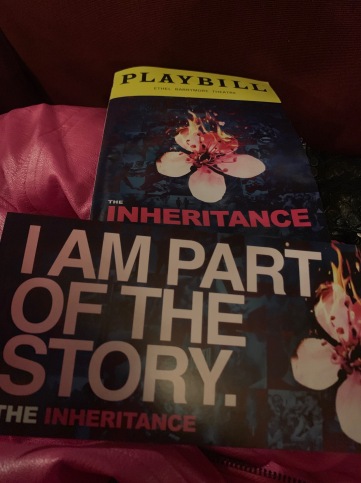