Official Blurb:Lin-Manuel Miranda takes the stage as the unlikely Founding Father determined to make his mark on the new nation as hungry and ambitious as he is. From bastard orphan to Washington’s right hand man, rebel to war hero, a loving husband caught in the country’s first sex scandal, to the Treasury head who made an untrusting world believe in the American economy. George Washington, Eliza Hamilton, Thomas Jefferson and Hamilton’s lifelong friend/foil Aaron Burr all make their mark in this astonishing new musical exploration of a political mastermind.

My Take: I was REALLY looking forward to seeing Hamilton. That might be an understatement. I was REALLY REALLY looking forward to seeing it. However that also means that I was expected to be dissapointed. With my level of excitement and the ridiculous buzz surrounding it, how could it live up to the high expectations that I had. Very happily it does. As Ben Brantley stated in his Broadway review, “Yes, It really is that good”. ( it might be one of the few times i agree with Brantley).   I was already in the Lin Manuel Miranda worshiping bandwagon, but after this show I’m definitely all in, not only is the show brilliant his performance is fabulous too

There are many things that just work.

It is also the type of shows that feeds curiosity.  have been browsing wikipedia and historical websites since i saw the show yesterday. I kind of wanted to know more, it wets the appetite to learn a little bit more about characters you didn’t know and see others in a potential different light (the interpretation of Jefferson made me want to revisit his story!). Browsing around yesterday after the show I read this great interview in the Hollywood Reporter: ‘Hamilton’s’ Lin-Manuel Miranda on Finding Originality, Racial Politics (and Why Trump Should See His Show). Yes Trump definitely should see his show, the line, Immigrants, we get the job done, seems like it was made for him!

if you can get your hands on s ticket, do not hesitate, run to see this.  If you cant get tickets yet, don’t worry it will probably be on for a LONG time. 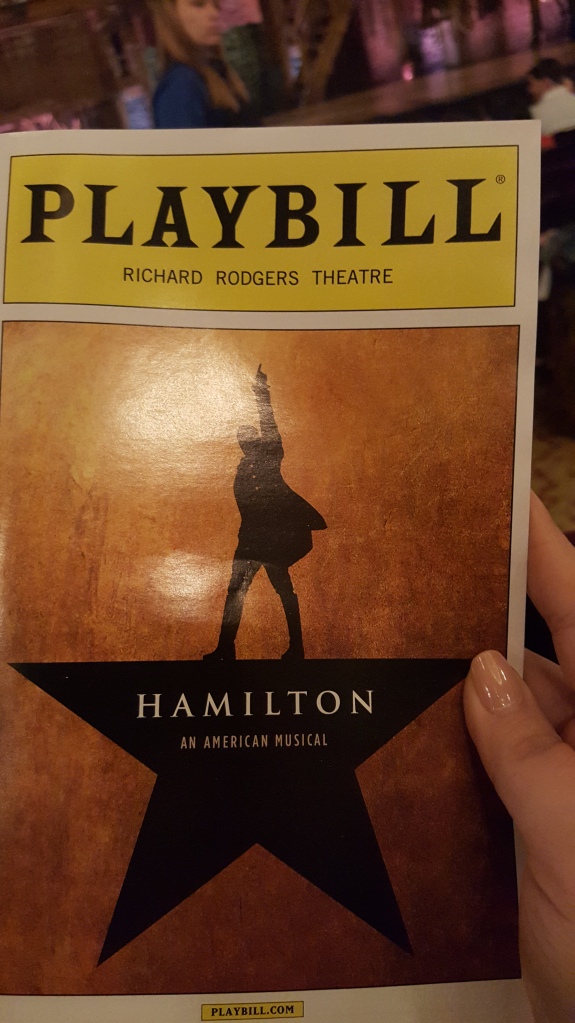