I learnt to make paella over the weekend, and im sharing the recipe
Ingredients (for 18 people):

The day Before: Cut the fish in squares and season with olive oil, salt and pepper.  Do the same seasoning with the calamari,shrimp and chicken. Peel the prawns and keep the shells for the stock. Season with salt pepper and olive oil. Leave all ingredients in the fridge overnight.
Before Starting the Paella:
Making the Stock: Take 16 cups of water and add the 12 cubes of fish stock, the shrimp shells as well as carrots, leeks, onion and celery and lots of the color. Leave to cook for a while and then drain.
Cooking the Mussels and clams: Cook the mussels and clams in the oven top under a water bath. Only use those that actually open.
Making the Paella:
Set up the paella pan. add a lot of olive oil and put all the garlic to cook. A lot of oil has to be added to make sure none of the vegetables stick

Once the garlic is browned, add all the onion and keep cooking until the onion is transparent. 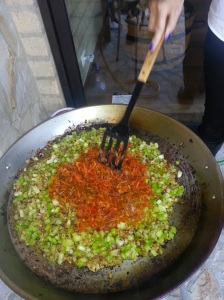 and then the carrots

It looks like a lot of vegetables but it will reduce significantly until it is almost noon recognizable.  Keep adding oil with the new ingredients to make sure that it doesn’t stick. If something sticks, just de-glaze it: add white or red wine and scrape it off. Keep cooking the vegetables until they are reduced, something like this:

Move the vegetables to the sides, add quite a bit of oil, and put the chicken lollipops in the middle to get them to a nice brown in the oil.

Once they are brown, mix with the rest of the mixture, move to the sides and make another circle in the middle. add the fish and cook on both sides. 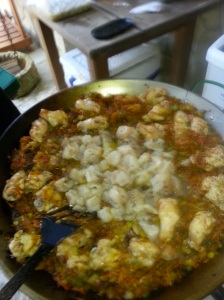 After the fish is cooked, mix with the rest of the mixture

Add another circle in the middle and add the calamari, make sure to not add to much of the liquid, just the calamari itself

Add a circle in the middle, and add the shrimp. As with the calamari, strain it so as not to add any additional juice from the shrimp. Leave the shrimp for just a bit and add the peas to the mixture and mix every thing together

,make a circle in the middle and add the rice in. 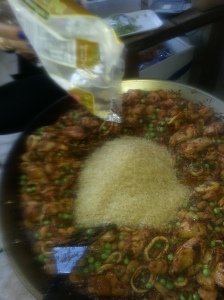 Leave it to brown for a few minutes with the mixture before the stock is added in. 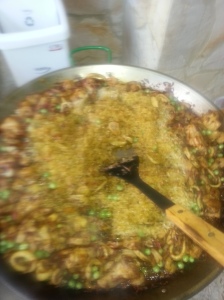 The stock needs to be added in steps. Add first 8 cups, or enough for it to be covered in stock 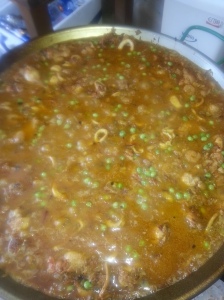 Once it starts reducing, keep adding more of the stock. Make sure that the flames are on low and that it is evenly lit in the middle and outer rings, so that it cooks evenly in all parts. Once the rice is almost cooked (but just waiting for it to open) add a little bit more stock, and start decorating. Take the prawns and place them around the paella in a uniform manner. These will cook with the steam and the heat of the paella. Add the cooked mussels and clams around it and also the julienne peppers 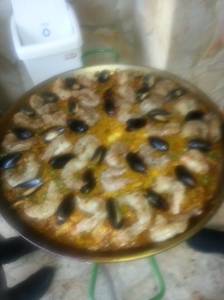 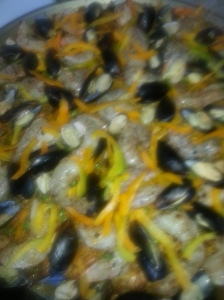 once it is decorated, cover with alumminum foil and place a wet towel on top and leave to finish cooking, basically when you see the shrimp cooked and the rice at point.

if in this process, while checking, you feel that you need to add more stock, keep adding and wait for it to be fully absorbed.

and that is it, the paella is ready to serve: