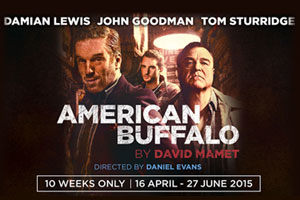 My Take:  This is a hard one to judge. As far as being able to witness amazing performances live, this show is spectacular. All three of the actors deliver world class performances here. I think the revelation for me was Tom Sturridge, of whom I had no expectations and he impressed me so much. I didnt even recognize him, that’s how much he transformed for the role and his junkie Bob is a spectacular acting show. Jhon Goodman and Damien Lewis also give masterclasses. I actually personally enjoyed the less showy but more nuanced performance that John Goodman has, where he expresses in every pause so many emotions and layers. Damien Lewis has the showy part, which he does to perfection, but its a loud Mamety part, that i think its much easier than the other two. However as an overall theater experience, it leaves a bit lacking. Definitely the first act is much weaker than the second, it tends to drag a bit, and i was barely holding on given my jetlag and lack of sleep. I think its play that held better in the 70s, when the shock of Mamet’s plays was very new. Having seen a number of them, they are not as shocking and it becomes more mainstream, leaving a little bit less of an impact or interest, which makes it really more about the performances than the actual story. 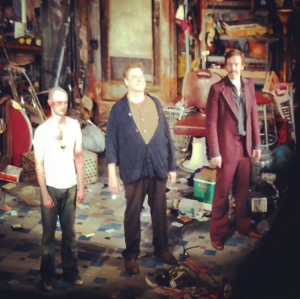 Official Blurb:  You’re invited to the wedding of the year, and what a swell party it’s going to be! Cole Porter’s classic feel-good musical, High Society comes to The Old Vic in a glittering new production staged in the round. Directed by multi-award-winning director and musical star Maria Friedman(director of Merrily We Roll Along, Olivier Award-winner for Best Musical Revival, Critics’ Circle and Evening Standard Awards for Best Musical). High Society is based on The Philadelphia Story and the 1956 film musical. Featuring hit songs including ‘True Love’, ‘You’re Sensational’ , ‘Well did you Evah?’ and the unforgettable ‘Who Wants to Be a Millionaire?’ Long Island socialite Tracy Lord is planning her lavish summer wedding when her ex-husband appears to try and win her back. His unwelcome arrival threatens to disrupt proceedings. When tabloid reporter Mike Connor arrives to cover the nuptials, he too takes a shine to the bride-to-be. But which of these three suitors will she choose?

My Take: I am a big Cole Porter fan and I love the Old Vic, so this was going to be right up my alley – and i was not dissapointed. first of all, the intimate setting, in a theater in the round is very appropriate for the production. It would have been very easy to go big on this, and actually keeping it small  was a hard undertaking that i feel proves very succesful as it made it more appealing and relatable. Second favorite thing, the music! There are some classic Cole Porter songs here, including one of my favorites: Let’s Misbehave, for which the dance number is spectacular (there is some great tap dancing on pianos to be had). Third, Kate Fleetwood kills it as Tracy Lord, what a fabulous performance. Fourth: I’ve loved Maria Friedman as a performer for a long time, but this show made me increase my admiration, she is great as a director, it is not an easy show to stage.

The show is romantic, sweet and witty and It made me want to go and watch the movie again, just to keep the experience going! Go see it now before it closes as it is a short run engagement.

One of my favorite parts of the show was at the begging, right before the start, the piano player comes on (on the beautiful piano on stage that goes up and down (see below))  and takes request, doing a mash-up of a classical, show-tune, and cartoon song entertaining the crowd. What we got: The smurfs, Carmen, Too Darn Hot and Cheek to Cheek. 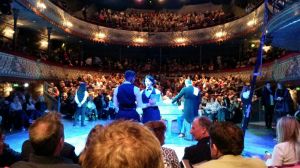