Official Blurb: Alone in the dark, with little more than her celluloid memories, Norma Desmond remains what she has always been — the greatest star of all.This spring, she will reclaim the spotlight once more. Glenn Close returns to Broadway in the tour de force performance that earned her the Tony Award for Best Actress – and a place in Broadway history – in Sunset Boulevard. Featuring a 40-piece orchestra, the largest in Broadway history, Andrew Lloyd Webber’s Tony Award®-winning masterwork of dreams and desire in the land called Hollywood comes to the Palace Theatre for 16 weeks only following a sold out run in London’s West End.

My take:  Glenn close is a national treasure. As a huge theater (And movie) fan being able to see Glenn Close live was an honor. Such talent in front of us. I had never seen Sunsent Boulevard, just heard the music, so being able to see it staged with her was amazing. However there are other things going for this production (Apart from her). AS the show, its strenght remain – Andrew Lloyd Webber’s score is still really impressive. This staging has a huge live Orchestra which gave the music depth and it provided staging depth as well. The costumes were also goregeous, I want to walk around in those beutiful kimono’s and jewels, Norma Desmond style. Finally, if that isnt enough, the hotnes and beautiful voice of Michael Xavier should be a draw. This is a must see!

Some pics of my merch buys and Glenn Close auctioning off stuff for Broadway Cares with her dog. 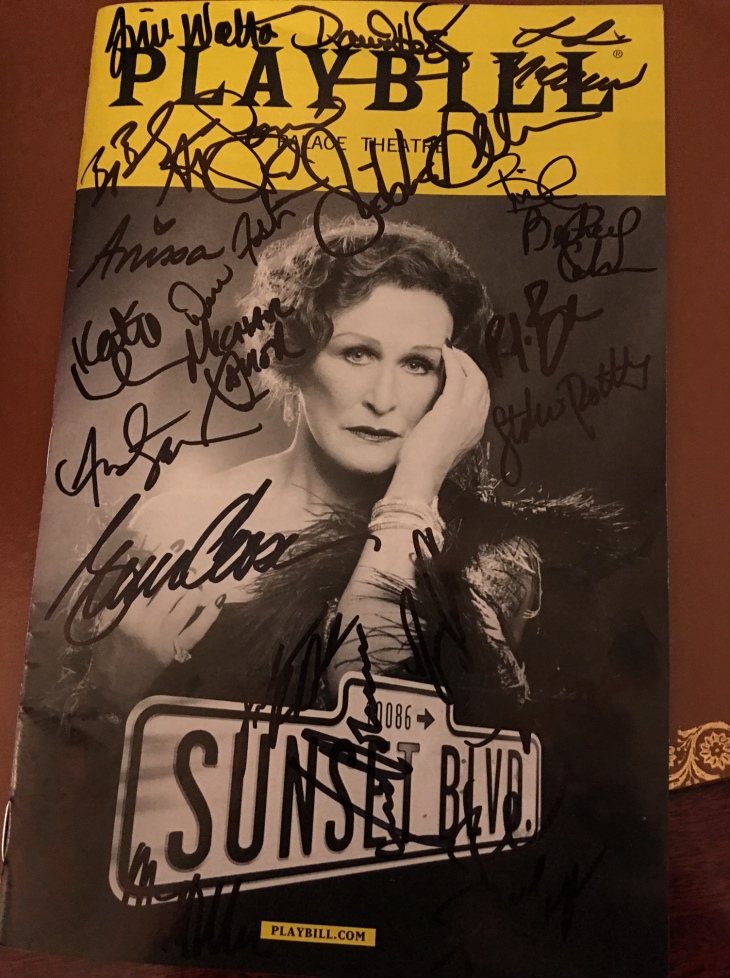 Official Blurb:  Winner of the Olivier Award for BEST NEW COMEDY, THE PLAY THAT GOES WRONG is a classic murder mystery chock-full of mishaps and more madcap mania than a Monty Python marathon! Welcome to opening night of The Murder at Haversham Manor where things are quickly going from bad to utterly disastrous. With an unconscious leading lady, a corpse that can’t play dead, and actors who trip over everything (including their lines), it’s bedlam beyond Broadway’s wildest nightmare and “A RIOTOUS EXPLOSION OF COMEDY!”

Is it an amazing written show – probably not, but will you laugh like you havent laughed in a while? definitely so. It is smart in its comedic timing. It is ridiculous funny in a physical comedy style, which I find very appealing. It gave me Noises Off feelings, for the new generation. The cast is spectacular and you will leave in a much better mood that you left.