My London theater options were all pink, I swear that has nothing to do with my choices of what to see, but im glad to share my thoughts on the experience.

DEATH OF A SALESMAN

Official Blurb: “I don’t say he’s a great man…but he’s a human being, and a terrible thing is happening to him. So attention must be paid. He’s not to be allowed to fall into his grave like an old dog. Attention, attention must be finally paid to such a person.”

Marianne Elliott (War Horse, The Curious Incident of the Dog in the Night-Time, Angels in America and Company) co-directs with Miranda Cromwell, (Associate Director on Company and Angels in America) bringing a unique vision to one of the greatest plays of the twentieth century, seen through the eyes of an African American family.

My take: this was such an excellent production of Death of a Salesman. One of the saddest stories and saddest characters that lets us dwell on so many questions of hope, sadness and struggle. I didn’t know what to expect with Wendell Pierce, as his characters are usually more humorous or action, but his performance was haunting. I wasn’t 100% sure when it started but by the end you are taken for a full tour de force by him. Sharon D. Clarke was also spectacular, and gave such gravitas to the production. The second act is such powerfully written piece of theater and it was a pleasure to experience it live and so well acted (the first act – it’s good it’s just not as tight as the second, not that I am one to criticize Arthur Miller). Mesmerizing

The staging is really interesting. Pieces of furniture go up and down on exposed cables. At the begging the full effect is not completely visible but in the last scene it all comes together and it’s a beautiful image on a very dark and sparse space, very appropriate for the play.

The only thing i didn’t love was Biff and Happy, although they grew on me I think they are the only week point in this great production. 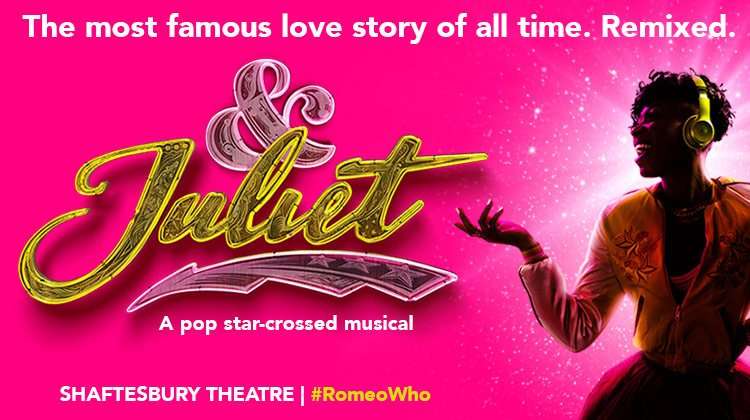 Official Blurb: The most famous love story of all time. Remixed.
& Juliet is the hilarious and fun-loving new West End musical that asks: what if Juliet’s famous ending was really just her beginning? What if she decided to choose her own fate? This is Juliet’s story now. So don’t tell her how it ends…

Soaring with pop anthems including …Baby One More Time, Everybody (Backstreet’s Back), Love Me Like You Do and Can’t Feel My Face, & Juliet is a riotous blast of fun and glorious music that proves when it comes to love, there’s always life after Romeo…

My take: I had an opposite reaction to this show than why I had at Jagged Little Pill. I was super curious to see it but having had the below expectations experience at JLP I came in with my bar lowered and expected a fun show but didn’t know what else I was going to get. I was happily surprised and truly impressed. First of all I had failed to realize how marvelous Max Martin is. Of course I’d heard of him but this really is a pop classics jukebox musical which is quite impressive that only one person would be involved in all this songs. It’s like a classics (my favorites) playlist. So many amazing songs like Backstreet Boys and Britney classics, Since you’ve been gone, Some classic Katy Perry, Domino, F**in Perfect among others (like the great surprise that was It’s my Life from Bon Jovi) . What i liked the most was how reinvented some of the songs sounded in a more acoustic setting, and without the over production. I think my favorite reinvention is Baby one More Time, the shows version is haunting instead of pop and it works really well.

The three leads are excellent. I especially enjoyed Cassidy Janson (probably my favorite person on stage) as Anne and Miriam-Teak Lee as Juliet. A very modern take of Juliet but her voice is spectacular. The story is quirky but cute, i liked it – a little female history revisionism for the 21st century and I am here for it! It was also great that it just wasn’t the story, but It’s William Shakespeare and his wife telling it, a good twist and a great comic relief

I also enjoyed the costumes. Modern meets old and super interesting. The only costumes I wasn’t fully in awe of was Juliet- which is weird as they should have been the best. All in a fun night at the theater, you will be dancing in your seat (I mean who can resist the beat of Got This Feeling) and leave with a smile on your face.

some pics where you see the sets: