Lincoln in the Bardo by George Saunders 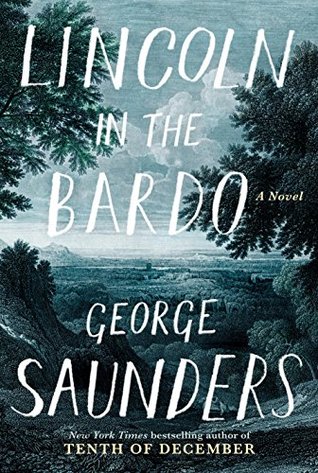 Goodreads Blurb:  In his long-awaited first novel, American master George Saunders delivers his most original, transcendent, and moving work yet. Unfolding in a graveyard over the course of a single night, narrated by a dazzling chorus of voices, Lincoln in the Bardo is a literary experience unlike any other—for no one but Saunders could conceive it. February 1862. The Civil War is less than one year old. The fighting has begun in earnest, and the nation has begun to realize it is in for a long, bloody struggle. Meanwhile, President Lincoln’s beloved eleven-year-old son, Willie, lies upstairs in the White House, gravely ill. In a matter of days, despite predictions of a recovery, Willie dies and is laid to rest in a Georgetown cemetery. “My poor boy, he was too good for this earth,” the president says at the time. “God has called him home.” Newspapers report that a grief-stricken Lincoln returned to the crypt several times alone to hold his boy’s body. From that seed of historical truth, George Saunders spins an unforgettable story of familial love and loss that breaks free of its realistic, historical framework into a thrilling, supernatural realm both hilarious and terrifying. Willie Lincoln finds himself in a strange purgatory, where ghosts mingle, gripe, commiserate, quarrel, and enact bizarre acts of penance. Within this transitional state—called, in the Tibetan tradition, the bardo—a monumental struggle erupts over young Willie’s soul. Lincoln in the Bardo is an astonishing feat of imagination and a bold step forward from one of the most important and influential writers of his generation. Formally daring, generous in spirit, deeply concerned with matters of the heart, it is a testament to fiction’s ability to speak honestly and powerfully to the things that really matter to us. Saunders has invented a thrilling new form that deploys a kaleidoscopic, theatrical panorama of voices—living and dead, historical and invented—to ask a timeless, profound question: How do we live and love when we know that everything we love must end?

My Take: 4 out of 5. This was the first book of my New Book Club, and having heard so much about it I was really interested in getting into it. This is not a love at first sight book. IT grows on you and the more you think about it the more you appreciate it, but it is a hard read. It is a physically hard read as the way it is written, especially when you are reading in the kindle, is very confusing. Its kind of a play within the novel and it takes half the book to understand who is talking and where they are. However once you get the hang of it you can appreciate the beauty of what the author is trying to do. A great social commentary on how what we do affects us, what is good/bad. It is a strong commentary on race and racial relations and the end (i don’t want to spoil it but it is probably the best part), highlights how putting oneself in someone else shows can radically change our outlooks and make great outcomes.

Goodreads Blurb: No one’s ever told Eleanor that life should be better than fine. Meet Eleanor Oliphant: She struggles with appropriate social skills and tends to say exactly what she’s thinking. Nothing is missing in her carefully timetabled life of avoiding social interactions, where weekends are punctuated by frozen pizza, vodka, and phone chats with Mummy.  But everything changes when Eleanor meets Raymond, the bumbling and deeply unhygienic IT guy from her office. When she and Raymond together save Sammy, an elderly gentleman who has fallen on the sidewalk, the three become the kinds of friends who rescue one another from the lives of isolation they have each been living. And it is Raymond’s big heart that will ultimately help Eleanor find the way to repair her own profoundly damaged one. Soon to be a major motion picture produced by Reese Witherspoon, Eleanor Oliphant Is Completely Fine is the smart, warm, and uplifting story of an out-of-the-ordinary heroine whose deadpan weirdness and unconscious wit make for an irresistible journey as she realizes. . .

The only way to survive is to open your heart.

My Take: 4 out of 5. I was expecting not to like this book. I actually was really disliking it at the beginning and was going to leave it aside. By the end of the book I was crying and totally invested on Eleanor’s life. You kind of want to give her a hug, and have someone give you one as well. A beautifully humane story. A little glimpse on how trauma can affect us and how even though people look different/weird, they deserve an equal chance and sometimes its not their fault how they are that way. I think and Elanor sequel though I’m invested and need to know what happens after.

Goodreads Blurb:  Who says you can’t run away from your problems? You are a failed novelist about to turn fifty. A wedding invitation arrives in the mail: your boyfriend of the past nine years is engaged to someone else. You can’t say yes–it would be too awkward–and you can’t say no–it would look like defeat. On your desk are a series of invitations to half-baked literary events around the world.

QUESTION: How do you arrange to skip town? ANSWER: You accept them all.

What would possibly go wrong? Arthur Less will almost fall in love in Paris, almost fall to his death in Berlin, barely escape to a Moroccan ski chalet from a Saharan sandstorm, accidentally book himself as the (only) writer-in-residence at a Christian Retreat Center in Southern India, and encounter, on a desert island in the Arabian Sea, the last person on Earth he wants to face. Somewhere in there: he will turn fifty. Through it all, there is his first love. And there is his last. Because, despite all these mishaps, missteps, misunderstandings and mistakes, LESS is, above all, a love story. A scintillating satire of the American abroad, a rumination on time and the human heart, a bittersweet romance of chances lost, by an author The New York Times has hailed as “inspired, lyrical,” “elegiac,” “ingenious,” as well as “too sappy by half,” LESS shows a writer at the peak of his talents raising the curtain on our shared human comedy.

My Take: 4 out of 5. This was our second book club selection. I liked it, its wonderfully written but somehow I found the character of A4thur Less very unrelatable. That is a bit of a problem when you are supposed to get investing in his quest. However, i think the book also accepts that and its the quest of him realizing his lack of empathy that makes the heros journey interesting and why in the ned i did enjoy the book.  I did find that it is a unique story. You don’t get many stories of middle aged Gay men and how they go through that crisis and I found that interesting as it is a view point that is very different to mine, but which I found very different and enlighting. I also love that it truly was a love story, the blurb wasnt wrong. It is not only a love story, but a story of how to realize what love is and how to see what you have in front of you.