Harry Potter and the Cursed Child

Official Blurb:  Based on an original new story by J.K. Rowling, Jack Thorne and John Tiffany, Harry Potter and the Cursed Child is a new play by Jack Thorne. This epic two-part event brings one of the most iconic characters of our time to life on stage – now as a husband and father of three – with his friends still by his side. Cursed Child sends the imagination soaring with awe-inspiring theatrical wizardry – the likes of which have never been experienced until now. Whether you’re already a fan or new to Harry Potter, this production will leave you completely spellbound. Rolling Stone calls it, “The stuff of legend. It will inspire wonder in theatergoers and Potterheads alike.” And Entertainment Weekly declares, “It redefines the possibilities of theatre. Broadway will never be the same.” It was always difficult being Harry Potter, and it isn’t much easier now that he is an overworked employee of the Ministry of Magic, a husband, and father of three school-age children. While Harry grapples with a past that refuses to stay where it belongs, his youngest son Albus must struggle with the weight of a family legacy he never wanted. As past and present fuse ominously, both father and son learn the uncomfortable truth: sometimes, darkness comes from unexpected places. Don’t miss this deeply human story that reveals how friendship and family can ultimately bring us together to conquer our greatest fears and foes

My take: It’s a theatrical wonder that definitely should be seen, however my question after having endured the two part marathon was: did it really have to be Two parts? I get the business decision behind it (I paid two tickets not 1) but even that one is short sighted – in the future they would get much more tourist traffic with just one ticket. As for servicing the story, I don’t think it needed it- there are plenty of places where the story could be tightened and you could have a really long one part play that would make the theater going experience much more enjoyable. As for the show- as a Harry Potter fan of course I loved it! It is new, yet borrows a lot from the past books and you are intertwined with all the characters and stories you loved. Not to go against #keepthesecrets that’s all I’m going to say, but the story you will definitely enjoy. As for the staging it’s beautiful and impactful and the magic onstage is great – a true event.: 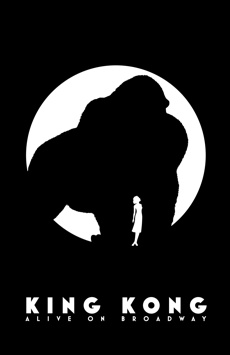 Official Blurb: The epic modern myth comes alive on Broadway through an innovative mix of animatronics, puppetry, music and stagecraft! It’s 1931, the world is in the grip of the Great Depression, and New York City is a place of pressure, of desperation, but also of hope. Enter Ann Darrow, a fearless young actress with a will of steel and dreams that reach as high as the just-completed Empire State Building. After a brutal struggle just to stay on her feet, Ann finds her big break in the form of Carl Denham, a fast-talking filmmaker who promises to make her the star of his next big adventure movie. Throwing caution to the winds, she joins Carl on a voyage to the mysterious Skull Island. There, they encounter a wonder more astonishing than they could have possibly imagined: a 20-foot-tall, 2,000-pound ape known only as Kong.To her surprise, Ann finds an unexpected kindred spirit in this magnificent, untameable creature. But when Carl hatches a plan to capture Kong and display him to the New York masses, she’s faced with a terrible choice. Will Ann follow the call of her own ambition? Or can she find the strength to stand up for what’s right? Roaring with heart-pounding action, KING KONG is a gripping and spectacular story of unlikely friendship, unshakable courage, and breaking free from the cages others put us in

My take:The last show I walked out of at intermission was little women in 2005 which was a great source material very boringly adapted and my family preferred to make a dinner reservation than submit ourselves to the second act. Well history repeated itself 13 years later as I walked out at intermission of King Kong this week. That might be all I need to say. Some good things: the staging is beautiful (loved the boat effects) and The King Kong puppet is really cool, but really one act was enough to see the theatrical wonder of puppetry and then we could go eat as there was some serious dislike in my family for what was going on in the first act. Not our cup of tea